Hip Hop dance includes a wide range of “street dance” styles that are associated with the Hip Hop culture born in New York City in the mid-’70s. Traditionally, the original dance of Hip Hop was Breaking, which was the predominant style from the 1970s until the mid-‘80s. Beginning in the Bronx, Breaking then spread worldwide.

Originally performed to Funk and Rock “breaks”, the music was more up- tempo and lent itself to what the dancers would refer to as “going off”. Breaking increasingly began to die out in the mid to late ’80s as the culture changed. The music was slowing down, being replaced by more of a “head nod” or “boom bap” sound.

This led to the emergence of a new style of Hip Hop dance expression, more correctly termed Hip Hop Freestyle, and led to movements more suited to the music. New steps were created at a fast pace and the vocabulary continues to grow.

Dancers like Buddha Stretch, Link, Loose Joint, Shaik, Rosie Perez, Peter Paul, Scoob and Scrap and others were at the forefront of what was happening and were considered pioneers of this new style. Different groups were formed and many danced for music artists of the time.
Additionally, other styles of dance from the US came under the Hip Hop umbrella through cross-pollination and their association with the culture by the media. These included Locking, Popping, Krump and many more.

Hip Hop Freestyle in the 21st century is an amalgamation of styles. It continues to constantly evolve and adapt to the times. all these styles fuse and are used together to create what we know as….street dance.
In our Hip Hop classes our dancers follow our in house Achievement awards to reach their goals and train in authentic Hip Hop moves 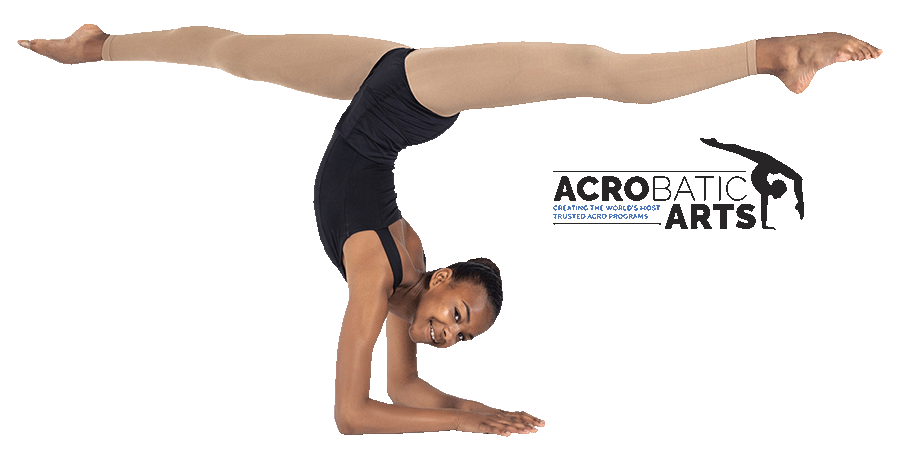 Acrobatic Dance, or acro as it is commonly referred to by dancers and dance professionals, is the beautiful fusion of classic dance technique and the precision and athleticism of acrobatic elements. Often defined by unique choreography, acro dancers seamlessly blend musicality, emotional expression, line and extension with acrobatic movements in a dance context.

Acro’s roots are in traditional Chinese dance, later appearing as a favoured style on the Vaudeville stage. More recently, acro gained popularity with the wide spread success of the contemporary circus productions of Cirque du Soleil. Main stream media including dance television programs like ‘So You Think You Can Dance’, ‘America’s Best Dance Crew’ and ‘Dance Moms’ have further fuelled it’s demand in amateur competitive dance and studio settings.

Acro is an especially challenging style for dancers to master as training in both dance and acrobatic elements is required. Acro technique includes balancing, limbering, tumbling and partnering, based in flexibility, contortion and strength.

Lyrical dance is a dance style that embodies various aspects of ballet, jazz, acrobatics and modern dance. The style combines ballet technique with the freedom and musicality of jazz and contemporary. According to Jennifer Fisher, lyrical dance is “strongly associated with clearly displayed emotional moods, fast-moving choreographic strategies, emphasis on virtuosic display, illustration of song lyrics, and, in group form, exact unison.” The style is usually danced at a faster pace than ballet but not as fast as jazz.

Unlike traditional forms of dance, contemporary is considered to be somewhat unbound by much rigidity and rules. The dancers of this genre have the ability to transform a performance based on their own interpretations. This is achieved through honing in on certain techniques, such as focusing on strong ballet-influenced leg movements, fall and recovery, floor work and further improvisational elements. More frequently than not, contemporary dance is performed barefoot to allow for more fluidity in movement and connection to the dance surface.

One of the most important aspects of contemporary dance is the element of improvisation. While some forms of dance such as ballet can be quite rigid and structured, contemporary dance relies on fluidity and improvisational movement to evoke a range of feelings in the viewer. It also offers the dancer ultimate creative freedom to perform an emotive piece that identifies with them.

Latest from the Blog

I love to dance

I love to dance where I feel comfortable with really nice teachers and where I make friends" I would add that I appreciate the commitment and enthusiasm of all the teachers to get the best out of everyone while ensuring dancers are having lots of fun!

I have made some new friends!

I am so glad I joined Street Struck Dance, because it is so fun and so friendly. All the teachers are kind, they make the classes super fun and I have learned lots! Plus, I have made some new friends!

Millie has grown in confidence

Millie has grown in confidence since joining Street Struck Dance. All her teachers have brought out the sparkle that had been dimmed a little, showing such encouragement and kindness. Her passion for dance is growing, the invitation to join Crew has given her a great boost. We would Highly recommend Street Struck Dance to anyone with a passion to dance!

They help you to be the best dancer you can be

I have been going to Street Struck for a while now. I love all the classes, they are so much fun and you learn loads of new dances. I have also made loads of friends. Suzanne, Chloe and Michelle are all amazing teachers and although some moves can be hard, they help you to be the best dancer you can be!’

I think your classes are really helping Freya grow in confidence, and she loved doing the shows!! Thanks, and we are looking forward to next term.

Amelia has come on leaps and bounds

Hi Suzanne. Amelia has come on leaps and bounds with her confidence since joining your dance class in Drakies. She was always quite a shy girl but both myself & her mum have noticed how much more outgoing & confident she is now in herself. Thank you so much for all you have done

Amy had a great time

Suzanne, myself and Amy cannot thank u enough for allowing Amy (who has special needs) to try your dance classes. She had a great time and always got excited when she put her street struck dance t-shirt on, as this helped her understand where she was going. I will highly recommend your dance classes to all my friends.

This website uses cookies to improve your experience while you navigate through the website. Out of these, the cookies that are categorized as necessary are stored on your browser as they are essential for the working of basic functionalities of the website. We also use third-party cookies that help us analyze and understand how you use this website. These cookies will be stored in your browser only with your consent. You also have the option to opt-out of these cookies. But opting out of some of these cookies may affect your browsing experience.
Necessary Always Enabled
Necessary cookies are absolutely essential for the website to function properly. This category only includes cookies that ensures basic functionalities and security features of the website. These cookies do not store any personal information.
Non-necessary
Any cookies that may not be particularly necessary for the website to function and is used specifically to collect user personal data via analytics, ads, other embedded contents are termed as non-necessary cookies. It is mandatory to procure user consent prior to running these cookies on your website.
SAVE & ACCEPT